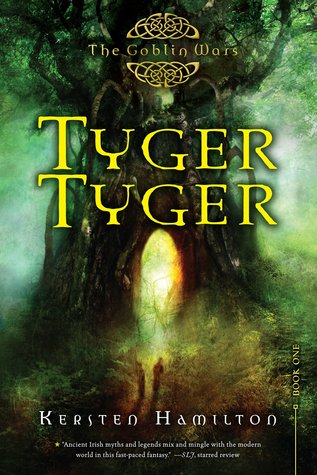 Tyger Tyger was such a good book! It was full of action and adventure that kept me on the edge of my seat throughout the whole book!

Teagan Wylltson’s best friend, Abby, dreams that horrifying creatures—goblins, shape-shifters, and beings of unearthly beauty but terrible cruelty—are hunting Teagan. Abby is always coming up with crazy stuff, though, so Teagan isn’t worried. Her life isn’t in danger. In fact, it’s perfect. She’s on track for a college scholarship. She has a great job. She’s focused on school, work, and her future. No boys, no heartaches, no problems.

Until Finn Mac Cumhaill arrives. Finn’s a bit on the unearthly beautiful side himself. He has a killer accent and a knee-weakening smile. And either he’s crazy or he’s been haunting Abby’s dreams, because he’s talking about goblins, too… and about being The Mac Cumhaill, born to fight all goblin-kind. Finn knows a thing or two about fighting. Which is a very good thing, because this time, Abby’s right. The goblins are coming.

I was a bit confused by the first few pages of the book. There was a monkey and a couple of names that weren’t mentioned in the synopsis on Goodreads, so it took me a page or two to really get into this book. When I did, though, I was hooked! Events began unfolding within the first few chapters, which also helped. For example, we found out at the end of the first chapter that Teagan has a cousin she didn’t know about. The mystery surrounding this cousin made me want to continue reading!

One thing that bugged me a little bit was how easily Teagan accepted that there were goblins. She said that it was difficult for her to believe several times in the book, but we never actually saw her struggling with it. We were just told that it was a struggle for her to accept it.

Another thing that was a bit jarring was the inclusion of a guardian angel. It didn’t seem to fit with the other creatures we met, such as the cat-sidhe and dancing frogmen. I feel that guardian angels are in a different realm than Irish creatures. It would be like someone mixing Roman gods with Norse ones. It just didn’t mesh well.

I really liked the romance. Finn was a great love interest because he wasn’t perfect.  He had flaws, which made him realistic to me. I also was happy that the romance wasn’t the main focus of the story. The plot came first, which is how it should be, in my opinion.

The ending was mind-blowingly awesome! In the last fourth of the book, the action picked up tenfold from what it was beforehand. I was flipping the pages like a madwoman while new revelations flew past me one after another. After the climax happened, I noticed myself take a deep breath, like I’d been holding my breath for a while and now that the characters were safe, I could breathe again. That’s how you know a book has gripped you! And the last sentence in Tyger Tyger was so intriguing! It definitely wasn’t a cliffhanger, but that sentence let me know that this story was far from finished!

My goodness, this book was awesome! It had great characters, a fast-paced plot, and an intriguing ending! I am so excited to see where this story will head next! I give Tyger Tyger five stars! Definitely recommend it!