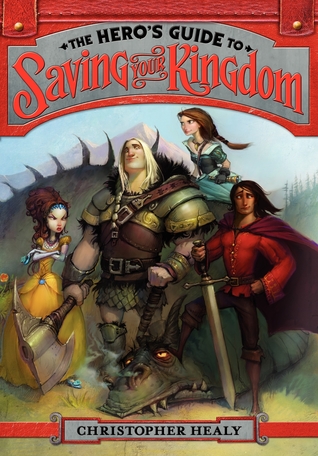 This book grated on me, and I think it was because I’m not the right audience for this book. I did enjoy it somewhat, but I’m wondering if I would’ve liked it more had I been the target age.

One thing this book did really well was create distinct characters. There were four princes and four princesses and I thought for sure that I was going to mix them all up, but it never happened! They were all distinct enough that I never got them confused, which was good.

Another thing I liked about this book was that it was fast-paced. It had plenty of action, and there were illustrations to break up the text somewhat as well. I was able to read this 400+ page book in 2 days. That’s how fast-paced it was.

Now here’s why I didn’t like this book: I didn’t like the characters. They were basically a caricature of a character, where their flaw was exaggerated and that’s all you could see. For example, Frederic was a prince who didn’t like change and was afraid of everything. That’s what the author emphasized again and again. What were his aspirations? Did he want to become king one day? What did he think about his father keeping him from doing anything even remotely dangerous? I don’t know the answer to any of these questions because he was a walking flaw. That’s all he was.

Another thing that bothered me was the antics that happened in this book. It read like a cartoon. No one ever dies and if anyone gets injured, they’re easily healed. I had to try not to roll my eyes several times throughout the book. I did laugh out loud at the part where Duncan tried to ride three horses at once.  That was a pretty funny image!

I think I’m just too old for this book. It was meant for middle grade readers and I’m in my 20’s. If I were to rate this based on my enjoyment, I’d give it 2 stars. But I don’t think that’d be fair since I’m not the target audience. So I’m going to give it what I think my 11-year-old cousin would: 4 stars.