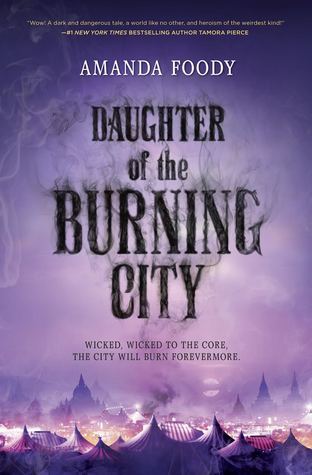 Daughter of the Burning City was a good read, but not as good as I had hoped. It was unique and entertaining for the most part, but I did have some trouble with it.

Sixteen-year-old Sorina has spent most of her life within the smoldering borders of the Gomorrah Festival. Yet even among the many unusual members of the traveling circus-city, Sorina stands apart as the only illusion-worker born in hundreds of years. This rare talent allows her to create illusions that others can see, feel and touch, with personalities all their own. Her creations are her family, and together they make up the cast of the Festival’s Freak Show.

But no matter how lifelike they may seem, her illusions are still just that—illusions, and not truly real. Or so she always believed…until one of them is murdered.

Desperate to protect her family, Sorina must track down the culprit and determine how they killed a person who doesn’t actually exist. Her search for answers leads her to the self-proclaimed gossip-worker Luca, and their investigation sends them through a haze of political turmoil and forbidden romance, and into the most sinister corners of the Festival. But as the killer continues murdering Sorina’s illusions one by one, she must unravel the horrifying truth before all of her loved ones disappear.

One thing I really liked about this book was how unique it was! I mean, the main character was born without eyes! How much more unique can you get? There were also all sorts of interesting people and acts in the festival of Gomorrah, which was fun to see too. I really enjoyed learning about this festival and its people!

I also liked how the story came full circle. It started off by showing the reader what Sorina’s show is like, then ends with a viewing of it again. It showed the changes that happened in the book, which was cool. I thought it also concluded the story well. I really liked that the author chose to end the book this way.

I did guess the twist about Agni and Villiam being the killers several pages before it was revealed. I usually guess the twist a few sentences before it is revealed if at all, so the fact that I guessed it that early isn’t a good sign. I like my twists to sneak up on me and surprise me. This twist didn’t do that, unfortunately.

Villiam was a very multi-faceted villain, though, which I liked. He cared about the people of the festival, he was a great proprietor, he wanted to help the festival, etc. But he had a twisted way of doing so. He definitely wasn’t being evil just to be evil; he had viable reasons, which I liked.

The beginning of the book was kind of confusing. We meet all of Sorina’s illusions almost all at once, which confused me. We were kind of just thrown into the book without much explanation of the layout of the festival and who everyone was, which confused me a bit. We do get this information later and it doesn’t take long to get acclimated, but for the first chapter or two, I was really struggling.

This seems to me to be more of a character-driven novel than an action-filled one. There aren’t many action scenes; instead we get more of the day-to-day information as we follow Sorina in her search for her family members’ killer. It isn’t a bad thing that it is more character-driven, but I like a lot of action scenes in my books, so it kind of slowed the book down for me.

I still have questions that I didn’t get answered about Sorina’s illusions. Do they appear fully grown when she creates them? Do they age? Can she make the same one twice? These are just a few of the questions I had that never got answered.

While I did enjoy this book for the most part, I didn’t love it. I think I’m in a bit of a reading slump, though, so take my words with a grain of salt. I give this book 3 stars. 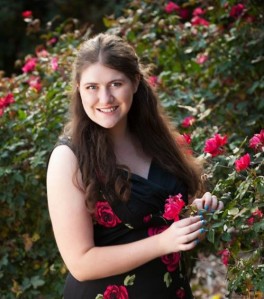