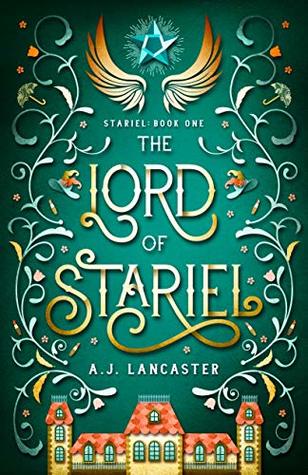 I received an advance copy of this book from NetGalley.  This in no way affects my opinions given in this review.

The Lord of Stariel is the first in a steampunk fantasy quartet by AJ Lancaster.  It has magic and fairies and a great cast of characters.

Everyone knows who the magical estate will choose for its next ruler. Or do they?
Will it be the lord’s eldest son, who he despised?
His favourite nephew, with the strongest magical land-sense?
His scandalous daughter, who ran away from home years ago to study illusion?

Hetta knows it won’t be her, and she’s glad of it. Returning home for her father’s funeral, all Hetta has to do is survive the family drama and avoid entanglements with irritatingly attractive local men until the Choosing. Then she can leave.

But whoever Stariel chooses will have bigger problems than eccentric relatives to deal with.
Winged, beautifully deadly problems.
For the first time in centuries, the fae are returning to the Mortal Realm, and only the Lord of Stariel can keep the estate safe.
In theory.

The Lord of Stariel has a simple, practical writing style and isn’t flowery at all.  I thought this fit the book well because the main character, Hetta Valstar, is pretty practical as well.  This book is written in British English, as well, which took some getting used to.

One thing I really liked was the world-building.  The author created a new religion, which had multiple deities and Druids that presided over ceremonies.  Another thing the author created was the different magic types.  There was pyromancy, technomancy, illusion work, etc.  While I enjoyed the world-building that I got, I wish there was a whole lot more of it.  I wanted to know how exactly the magic systems worked, what the religion was called, how long it took to become a master at a type of magic.  I hope the next book has more world-building because I feel we just scratched the surface in this book.

The first half of this book was pretty slow.  It was mainly about introducing characters and giving a bit of backstory.  The main plot line doesn’t even show up until around 45% of the way into the book.  I don’t do well with books that focus on characters more than a plot or action, so I was a bit bored with the first half of the book.  Once that plot line was introduced, however, the book really took off.  I could barely put it down after that!

There is a bit of a love triangle for most of this book, but in my mind, there was no contest between Hetta’s two suitors.  I shipped Wyn and Hetta for most of the book.  They just bantered and interacted so well with each other!  The fact that Hetta wasn’t overly indecisive about who to pick and already seemed to have her mind made up for the most part helped make the love triangle bearable.

A lot happened in the last few chapters of this book, but it never felt rushed to me.  It just seemed like the author made good use of the pages.  While the main plot line is wrapped up, there is definitely room for more books, which is good since there are supposed to be three more books in this series.  I hope the next book explores the world more in depth, as well as the realm of Faerie.

The Lord of Stariel was a really good book, once the action started.  I loved the characters and can’t wait to see more of them in the next book!  Despite the slower first half, I give this book four out of five stars!

That’s two unreasonably attractive men in the space of half an hour, she thought distantly. Goodness knows what the next two weeks will bring, if that’s a representative sample of the populace now. – 9%

How long could you play a role before it stopped being one?  When did illusion become reality? – 16%

Laughter choked out of her like bits of glass, bright and painful, turning dangerously close to tears.” – 46%

1 thought on “The Lord of Stariel by A.J. Lancaster”