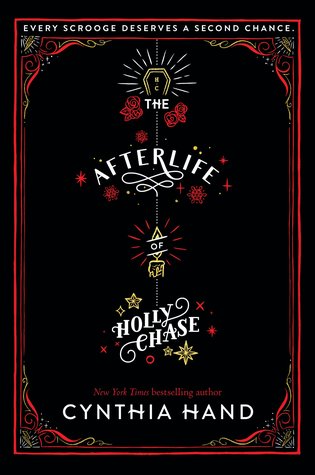 My book club chose The Afterlife of Holly Chase by Cynthia Hand for our December book.  It was a fun Christmas-themed book that put us in the holiday mood.

On Christmas Eve five years ago, Holly was visited by three ghosts who showed her how selfish and spoiled she’d become. They tried to convince her to mend her ways.

And then she died.

Now she’s stuck working for the top-secret company Project Scrooge–as the latest Ghost of Christmas Past.

Every year, they save another miserly grouch. Every year, Holly stays frozen at seventeen while her family and friends go on living without her. So far, Holly’s afterlife has been miserable.

But this year, everything is about to change. . . .

This book centers around a girl named Holly Chase.  Holly is definitely a Scrooge-like character when we first meet her.  She’s self-absorbed, rude to her housekeeper, and doesn’t show any emotion at her stepmother’s funeral.  Despite all this, she grew on me, so much so that by the end of the book I was rooting for her to get what she wanted.

The author gives us a very detailed physical description of Holly near the beginning of the book.  We get everything from her hair color to her height, which made it easier for me to picture her.  A pet peeve of mine is when an author just gives the reader one defining feature of the main character, such as their eye color.  It’s especially irksome to me when the author does give a physical description, but it’s so far into the story that I have already created a mental image of the character that’s completely different from what the author describes.  So I’m glad that Cynthia Hand gave the reader a lot of details about Holly early on in the book.

The first few chapters describe Holly’s life before she dies.  These chapters felt sort of rushed to me, like it was a recap of something we should already know.  Once Holly dies, the story skips five years into Holly’s time at Project Scrooge.  I thought this was an odd thing to do.  I wanted to see Holly’s adjustment period as she came to terms with the fact that she was dead and was expected to work at Project Scrooge now.  We don’t get to learn with Holly about how the company works and who’s who and all those important details.  So when the story skips ahead five years, I was really confused.  There were terms and names and details being thrown at me that I didn’t know anything about.  I think it would’ve been smarter to keep at least the first month or two that Holly is at Project Scrooge so the reader can learn about everything while Holly does.

The gadgets that Project Scrooge uses are really cool!  There’s the Hoodie, a jacket that turns the wearer invisible when they put the hood up.  There’s also the transducer, which allows Holly to look at the Scrooge’s thoughts and memories.  And there’s also the Portal, which allows a person to move from one place to another instantly, whether it’s in a different city or even a different state.  I thought the author was really creative coming up with all these tech items!

Another creative thing the author did was use her publisher’s address as the location for Project Scrooge.  I doubt many people realized that 195 Broadway is the address of Harper Collins’ New York City headquarters, but I did and thought that was pretty clever.  Also, am I the only one that noticed that the first two films Holly’s dad made after her death were the last two movie ideas they discussed before she died?

***MAJOR SPOILERS IN THE FOLLOWING PARAGRAPH***

There were several plot twists near the end of this book.  I guessed some of them very early on, like that Stephanie was Dave’s daughter.  A few took me completely by surprise, though.  I never would have guessed that Holly’s time at Project Scrooge took place in the future, for example.  That plot twist kind of came out of nowhere and didn’t really feel like it fit with the rest of the story.  Plus, if I were Holly, I would have some seriously confused emotions about the fact that everything at Project Scrooge didn’t actually happen.  I especially would have had trouble with the fact that the Ethan Holly fell in love with in the future is only twelve years old in her present-day life.  I mean, she liked Ethan and may have even loved him, and then she’s all of a sudden back in her real life and he’s only twelve!?!  I’m sure that would’ve been a hard adjustment to make.

All in all, I liked The Afterlife of Holly Chase.  It was fun and light-hearted while still imparting an important message.  I felt some parts were a bit confusing, though, so I give this book three stars!

1 thought on “The Afterlife of Holly Chase by Cynthia Hand”